The laboratory of the experimental scientist, Joseph Priestley, who worked here from 1773-1780 can be seen at Bowood House , the home of the Marquis of Lansdowne.(Open Apr-Sep. 11.00-18.00) It was here on 1st August 1774 that Priestley isolated the gas subsequently recognised as oxygen.

Later the laboratory was used by John Ingen-Housz (d.1799) who discovered photosynthesis and was an exponent of variolation against smallpox. Ingen-Housz died in 1799 and was buried in a vault in St Mary's Church, Calne.

Priestley's Pool. It was here that Priestley collected gases bubbling naturally from the bottom of the pool for analytical experiments. 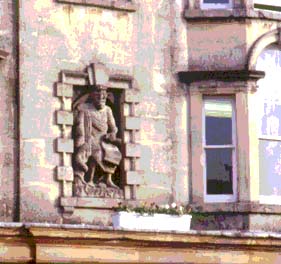 The exterior elevation of this 18th century doctor's house in the market square has a statue of Asculapius on the front. It was occupied in 1825 by a local surgeon, W. Clare.

Birth place of Thomas Willis, the seventeenth century Oxford physician. The little cottage in which he was born in 1611 still stands. There is no commemorative plaque and the house can only be viewed from the exterior.

St Peter's Church has a memorial in the Lady Chapel to Dr Edward Cressett, physician who died in 1693, aged 108. Is this a record for England's oldest doctor? Another record holder must be the local GP practice in which members of one family, the Maurices, have practised for over 200 years

A spring discovered in 1815 launched the town as a spa buts its popularity was short-lived, eclipsed by the proximity of Bath. The only remaining evidence of its former success is a line of Georgian villas seen on the right as one approaches the town from the direction of Devizes.

The village pub was once a rendezvous for travelling veterinary surgeons which is how it acquired the name Bleeding Horse.

Three plague graves in a field about one mile from the village. Two men died of plague during an outbreak in the mid-seventeenth century and were buried by a friend who is reputed to have dug a third grave for himself in which he was buried when he subsequently succumbed to the infection.. It is not possible to view them at present because they are in the middle of a pig farm.