This town was once the home of Dr G.L.Roberts (1766-1834), inventor of the Poor Man's Friend, a salve sold mainly through advertisements in newspapers of the late 18th and early nineteenth centuries. The ointment was recommended for treatment of Piles, Cuts, Burns and Leg Ulcers and ''should be found on every dressing table''. The recipe, which was bought by Bridport museum in August 2003 for £480, was found in an envelope marked "private" by a pharmacist who bought Roberts' old shop in the 1970s. It gives directions for making a vat of the ointment from 50lb of Waterford lard, which was to be cut into pieces and steamed with 6lb of English beeswax, and finally strained through cheesecloth. Other ingredients included salts of mercury, lead and zinc, and lavender.

Dr Roberts also recommended his ''Alterative Pills'', a necessary adjunct to The Poor Man's Friend. A large collection of pots and other memorabilia relating to Dr Roberts can be viewed in the Bridport Museum.

A gravestone in the churchyard commemorates Adam Stapleton Puckett, a doctor killed by a patient.

The HQ of the local Sailing Club occupies a small building on Victoria Pier, part of the town's famous ''Cobb''. This building was intended as a quarantine hospital and the original deeds of the Sailing Club specify that the premises can be requisitioned as an isolation hospital in case of an outbreak of infectious disease-especially smallpox.

The chapel of the Hospital of St John the Baptist and St John the Evangelist, founded in 1437, possesses an outstanding mediaeval triptych of medical interest. It depicts the raising of Lazarus, the healing of a blind man, the raising of the widow of Nain's son, and of Jairus' daughter.

An interesting collection of processional staves and wands of office of the local Sick Club is housed in the parish church. The Club was founded in 1870and ''Club Day'' took place on the first Friday of each June when the staves ,adorned with ribbons, were carried in procession through the village. The Club provided sick pay to its members. It was still in existence in 1974.

Healing Shrine of St Wite. Dating from the 13th century, this shrine in the north transept of the church is one of the few in England to house the relics of this female saint from the Viking era. There are three openings, or healing holes (q.v.

St Albans) intended for the insertion of diseased limbs. 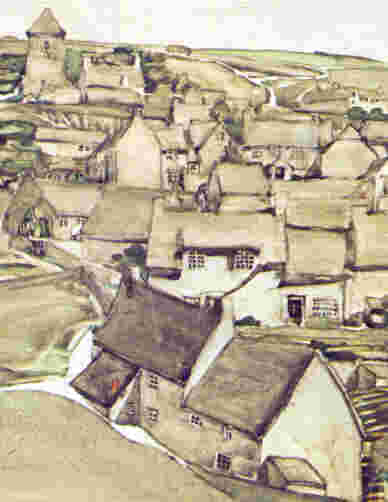 In the grave-yard of St Nicholas parish church is the tomb of Benjamin Jesty, ''an upright and honest man'' who vaccinated his wife against smallpox in 1774 and thereby can claim to have antedated Edward Jenner in the use of cowpox material. Jesty was a farmer and lived at Downshay which still survives.

was born in the manor house which still stands. Surprisingly there is no memorial to this great British physician, either at the manor or in the church. the Sydenham family lived here from 1551-1709.