Diatribes against the medical profession's stance on immunisation have been repeatedly heard over the last two centuries. Buxton church has an early example, a memorial to four year old Mary Ann Kent who succumbed to smallpox after being inoculated in 1773. It reads: ''This much lamented child was in the highest state of health and her mental powers began to open and promise fairest fame, when her fond parents, deluded by the prevalent custom, suffered the rough officious hand of Art to wound the flourishing root of nature and rob the little innocent of the gracious gift of life.'' 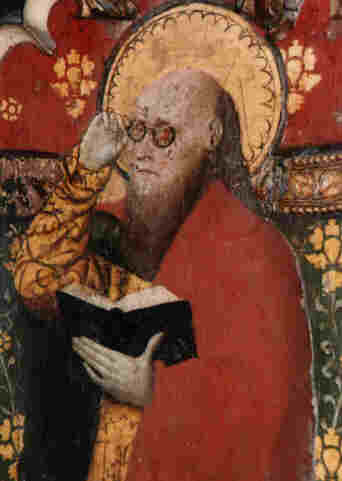 St Agnes Church possesses a finely painted 16th century rood screen on which St Matthew is depicted wearing spectacles (right). Spectacles were introduced at the end of the 13th century by Venetian glass workers and are depicted with increasing frequency in Europe from the 14th to the 16th centuries in frescoes and paintings. The spectacle frames of this period were made from leather and had no hinged side arms. A example can be seen in the Ashmolean Museum at Oxford.

. Sydney Terry, the only doctor at Cromer in 1796, had some steps made on the sea front to facilitate his patients progress onto the beach to indulge in sea bathing therapy. Nowadays, the steps have been reduced to a slope, though still retaining their original name.

Central library. Robert Barker, who practised in the town at the beginning of the eighteenth century left his library of 270 volumes to St Margaret's Church Library. A mere 60 volumes survive today and are housed in the Central library, making them the earliest surviving medical library in Norfolk.

An early purpose-built TB sanatorium in England opened in 1899 and provides a rare surviving example of a timber framed prefabricated hospital building.  Originally there were also a number of moveable wooden huts in the grounds, looking rather like summerhouses on wheels, in which patients could spend all day (and all night if deemed necessary) in the fresh air without facing into the wind. In 1910, Dr Claude Lillingstone introduced the practice of artificial pneumothorax as a treatment for tuberculosis, having undergone the treatment himself in Norway where he had first fallen ill.

Mundesley Hospital was refurbished in 1997 and is now the Diana Princess of Wales Treatment Centre for Drug and Alcohol Problems.

Strangers Hall Museum has a rare example of a Gout Stool. There is also a pewter bleeding bowl dating from 1689 and some instruments which once belonged to the Norwich Guild of Barber-Surgeons. The Castle Museum has a femur and pelvis which belonged to a mediaeval man living at Thetford who suffered from Perthe's disease and had visited the shrine of Notre Dame at Rocamour in south-west France. A pilgrim's badge from Rocamour was excavated from the grave. The Bridewell Museum. The Iceni Pharmacy is an excellent reconstruction of pharmacy artefacts and fittings taken from several discontinued Norfolk chemist shops. Part of the pharmacy dates from 1790.

There is a statue of Sir Thomas Browne in the Haymarket, erected in 1905 to mark the tercentenary of his birth. There is also a memorial in the church of St Peter Mancroft. His house in the Haymarket has disappeared but a magnificent overmantle from this house can still be viewed by visiting the Castle Museum.

The cathedral has a set of interesting roof bosses in the Bauchun Chapel (c.1460) which depict the popular mediaeval romance concerning the curing of leprosy. The story is told by Chaucer in his Man of Law's Tale and is also illustrated on wall paintings in Eton College Chapel.

The grave of  Nurse Edith Cavill who was shot in 1915, can be found in the churchyard to the south of St Saviour's Chapel.

A branch of the public library (219, Sprowston Road) is housed in the old Lazar House, a leper hospital dating from Norman times. It was founded by Herbert de Losinga, first Bishop of Norwich. It later became an alms house. There were 25 other known leper hospitals in Norfolk and although most of them survived the Dissolution, none of them are still extant.

was established in 1713 for the treatment of patients with mental illness. It is the oldest surviving hospital in the country specifically founded for the care of the mentality ill and currently the oldest building in the UK to have been in continuous psychiatric use (though it has been threatened with closure for some time) Since 1974 when the in-patient facilities were closed, it has continued as the Centre for Child and Adolescent Psychiatry.

at Thorpe, one and a quarter miles east of Thorpe village church is reputed to be the third oldest public mental hospital in Britain. The earliest part of the building is by Francis Stone and was constructed between 1811 and 1814.

The Norfolk and Norwich Hospital, St Stephen's Road was built between 1770 and 1775 to a design by William Ivory and a new wing was added in 1802 to complete the original H-shaped design. There have been several subsequent additions, the most substantial of which is E. Boardman's turreted construction of 1879. The hospital's pathological museum, founded in 1843 by the surgeon William Dalrymple, was the first to be established at a provincial non-university hospital. All that remains now is a vast collection of bladder stones which were removed from patients between 1771 and 1909 and which are kept in a wooden cabinet in the hospital's Stone Room which can be found in the basement of the Leicester Nurses' Residency. A leading European urologist in 1863 described the collection as ''the most perfect and complete record literally graven in stone that the world possesses of calculous experience''.

The hospital board room has a varied collection of portraits of doctors associated with the hospital.

The squire of Shotesham, William Fellowes, founded a small cottage hospital in the first half of the eighteenth century for the use of the village doctor, Benjamin Gooch who invented a fracture splint which bears his name. Though the building survives, the hospital closed by the end of the century in which it first opened.

. In the 1880's, a retired general practitioner tried to turn his house into a spa after discovering a spring in his garden which provided a rich source magnesium and iron. For a time Shelfanger Tonic Table Water could be purchased as far away as London but the venture proved unprofitable and the spa closed in less than a decade.

Outside wall of the parish church. Memorial to the Rev. Thomas Havers (1659-1719) on which a set of 18th century lithotomy instruments has been engraved in the position usually reserved for cherubs and heraldic devices.

The village practice here can trace its history back to 1788. In 1988, the practice held a two-hundreth anniversary exhibition and a video was made.

. Built in 1818 as a pump-room for a chalybeate (iron-containing) spring, the building is now a private residence. Thetford never enjoyed much success as a spa and the pump-room remained open for a few years only.