The Ship Inn. This ancient coaching inn near the centre of this village was once the venue of the South Gloucestershire Medico-Convivial Society, one of the earliest provincial medical societies in Great Britain. Its membership included the Bath physician Caleb Hillier Parry who read papers on exophthalmic goitre and angina pectoris to the society, and Edward Jenner, practitioner at Berkeley who achieved world-wide fame through his work on vaccination.

The pioneer of vaccination against smallpox, Edward Jenner was born in Berkeley on 17 May 1749, the son of the local vicar. Jenner was educated at nearby Wootton - under - Edge and Cirencester and was subsequently apprenticed to Daniel Ludlow, an apothecary at Chipping Sodbury

Blaise Castle Museum at Henbury. Reconstruction of the interior of a chemist's shop.

The museum is not generally open to the public and prospective visitors should contact the curator to arrange an appointment. (Telephone 0117 9753704)

The Bristol Eye Hospital in Lower Maudlin Street was founded in 1810.

Bristol Royal Infirmary has portraits in the board room. The Medical School Library has a very comprehensive historical collection of books on the subject of spas and mineral waters (310 vols.) and the 940 volume library of Caleb Hillier Parry which was originally donated to the Bath United Hospital but was transferred to Bristol for safe keeping during the second world war.

Brislington House. In 1804, Dr Edward Long Fox established a private mental asylum at Brislington to the south-east of the city. Originally designed as a group of detached houses where patients with different types of mental illness could be separately accommodated, the buildings were later joined together. Some detached houses on the estate were used for "members of the nobility".  Staircases, doors, joists and window frames were all constructed of iron to minimise the risk of fire. It was converted into flats in 2001. The grounds are a good example of a purpose- built landscape which was designed to aid the healing of damaged minds.

Once a thriving spa, there were two major springs. One was pumped into the Pittville Pump Room (1825-30) which survives and has statuary of Aesculapius, Hygeia and Hippocrates. The other at Montpellier gave rise to the elegant Rotunda which is now a branch of Lloyd's Bank.

The Corinium Museum provides an excellent display giving the visitor an insight into everyday life in Roman Britain. Amongst the many exhibits are some examples of Roman medicine phials though these do not amount to much.

Cathedral. Statue of Edward Jenner was erected at the west end of the nave in 1826.

The folk museum has a collection of doctors books and surgical instruments. Apply to the curator for further information.

Gloucester once had a flourishing spa. A spring was discovered in 1814 and the Gloucester Spa Company formed. A pump room was built and a row of magnificent houses which can still be seen in Spa road. A new church, Christ Church was built in Brunswick Road. Unfortunately, the Spa pump rooms are no longer standing and the only thing to be seen of them now is a plaque on a tree by the bowling green

The Gloucester Lunatic Asylum was founded in 1793 and later became known as Horton Road Hospital.

Coldwell Rocks, near Lydbrook. An isolated memorial stands near the river Wye to one John Warre, age 16, who drowned here in 1804. The inscription ends with the instruction "apparatus and directions for their application by the Humane Society for the saving of persons apparently drowned are lodged at the church of Coldwell." Here lies a profound mystery for there is not, nor ever has been, a church at Coldwell.

in Lydney Park. Permission to visit must be obtained from the agent at Lydney Park Estate Office. Access to the site is from the A48(T). Sir Mortimer and Lady Wheeler excavated this wooded hill-top site in 1928-29.

Originally intended as a promontory fort in the 1st century BC, the ramparts enclosed a small community which lived here in rectangular huts for nearly four centuries, making barrel-shaped pots and mining the iron-ore beneath the site. After AD 364, four Roman buildings were constructed, surrounded by a stone wall, the most important of which was a temple dedicated to the native British god Nodens. The layout of the buildings and the discovery of votive offerings, large numbers of pins and canine statuettes suggest that the complex was used as a centre of healing. In some cults, dogs were encouraged to lick the sores of patients with skin diseases, a practice which was thought to encourage wound healing! Many representations of dogs in bronze, bone and stone have been unearthed.

Though the foundations of the temple and part of the complex of baths are the only remains of Roman buildings now visible, the terrain of sheer-sided wooded valleys which fall away on three sides of this site stimulate the senses as much as the circulation. A collection of objects excavated from the site is displayed in the small private museum at Lydney Park. though the layout is a bit cramped and lacks explanation. The finest exhibit is a miniature bronze wolfhound known as the Lydney Dog. For memento hunters. modern copies mounted on white marble bases, can be purchased in the museum. 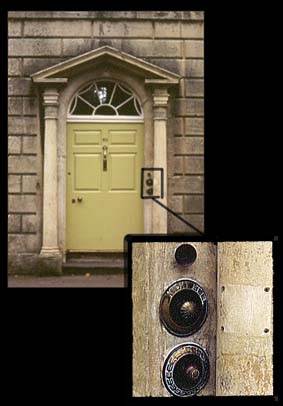 Bank House, High Street. Originally the village doctors house, there is an example of communication systems to summon the doctor at night which was in place before the era of the telephone. A night bell and a speaking trumpet are still visible to the right of the front door. The speaking tube was connected by a pipe to a similar trumpet shaped gadget by the doctor's bed. The house is now privately owned.

The Long Stone at Hampton Fields, just south of Minchinhampton is a megalith pierced by two holes. Like the holed stone at Men-an-Tol in Cornwall, the Long Stone is supposed to have healing properties. Small children would be passed through the holes to ward off smallpox, rickets and other childhood disorders. When some dowsers went to the stone a few years ago, they experienced a large discharge of magnetism from the stone. The dowsers attempted to recharge the stone by forming a circle around it and laying their hands on it. But the procedure had to be curtailed because they all experienced "headaches and fatigue".